How Many People Died In The Great Fire Of London?

Muddassar Memon answered
The Great fire of London was basically a conflagration which hit the central parts of London, England. It was started on Sunday, 2nd September 1666 and ended on 5th September 1666.

The fire devastated the medieval City of London located in the old Roman City Wall. It was said that the fire would reach the aristocratic region of Westminster but it did not. The exact amount of people who lost their lives in the fire is till date unknown, but was said to be quiet minimum. The fire destroyed 13,200 houses, 87 parish churches, including the St Paul's Cathedral and nearly all the buildings of the city authorities.

The report submitted, which said only a few people had died in the fire was challenged, as it is said that the people from poor and middle-class were not counted in the death toll.

Maria Kanellis answered
It's about 5,534! A lot more than you think, I know.

Anonymous answered
About 5 people actually but more were injured

Anonymous answered
Robert didnt start it it was an accident. It started on pudding lane in the kings official bakers. The ovens were left on at night and unfortunately on that night it started by accident. It wasnt meant to happen so people that think robert did it think again because he didnt get your facts rite xx
By Olivia Ward
12 year old

Sana Rashid answered
The incident of Great Fire of London took place in 1966 and the fire started on 2nd September till 5th september 1966. It was one of the most disastrous fire of the world. The official death toll was 478 people but now the sources say it was more than 6000. Read more about this incident Link

Anonymous answered
But remember, lower/middle classed people were not counted

Anonymous answered
Many sources say that only 16 people died in the London fire.

Anonymous answered
Loadsa different people have different answers, because some of the deaths went unrecorded.

Anonymous answered
People say only a few people died but the lower and middle class people were not accounted for their death so actually it could be over 7000!

Anonymous answered
6 people died including the lady who started it

Anonymous answered
Ancer it for me know

Anonymous answered
It was started by a maid that forgot to turn the bakerys ovens off !

Anonymous answered
The great Fire of London was in 1666 in Pudding Lane in the City of London. Most people believe the death toll was zero (indeed I learnt that at school in the 1960's, but it actually was 8

Anonymous answered
Our history teacher told us 7 people dies. It could be more. It could be less. But it was started by Robert Hubert a french mentally unstable spy -_- 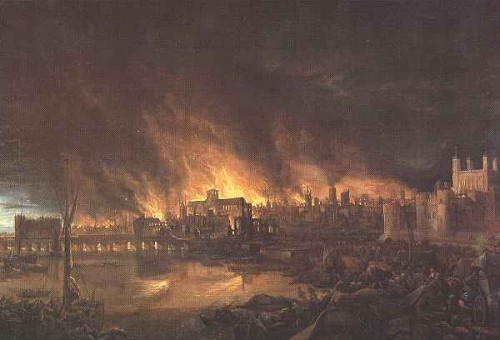 Anonymous answered
Hubert confessed, but later tried to retract his initial confession but people didn't believe him. After he was hanged it was found that he was out of the country when it happened.

Anonymous answered
-1 because someone was born in the great fire of london!

alexia smith answered
My teacher told me it was 6.